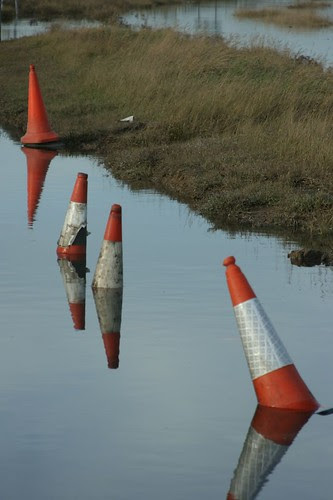 tide floods synchronised cone competition, a photo by ultraBobban on Flickr.
.............So if you look in the dictionary under Gatliff, it reads: Not easy, wet, challenging.......different every time. Fun!

So we headed down this morning at early doors, down the chicane of the high st in S. London as the drunkards were rearranging the cones into a street montage.

Down to Edenbridge and a change of tack as we had to change the route as a fallen tree blocked the road by Chartwell.

Sue B and I arrived at the start, signed in and then as per LDWA events (sorry, I think you'll find it's not LDWA but COPSE events - only Jezza will find this funny!) and started off without any pomp nor ceremony. Within a mile we were joined by a chap with the map reading skills of an ant. The gentleman who shall remain nameless made a number of significant errors in the first 5 miles.......I listened to him not a jot, but there were always cross words....."No it is not that way.......If you ACTUALLY read the directions, that will not come up until the NEXT paragraph......"

And so Matt Biggin, ultra legend and a tough man of muscle, sinew, brain and braun caught us up in no time, went wrong, caught up again and went off again. My duty was to stay with Sue on her first ultra since meeting Jezza and George in 2008. Matt was incidentally on that very same race!

CP1 at Toys Hill came and went and after a while I said to Sue that she should not follow this chap who couldn't navigate. We ran on and I ran to the next turn/stile/gate and waited. In about 25 metres, both were having a chit chat and missed me pointing, shouting and waiting and ran straight on. I didn't see Sue again but she said that at CP2, just 6 miles further I was 30 mins ahead.

So, through the wet, waterlogged fields, streams, bogs, floodplains and even streams running down paths I forged. I had been running with 300+ marathon legend Peter and 100 marathon legend Jackie and I managed to catch up with them again after about 6 miles. The trails of trail shoes grew thinner in the mud as fewer runners were in front of us. CP2 came and went and CP3 in Chiddingstone village was a good stop for soup, sandwiches and a cup of tea. 10 mins later we were back on the trail.

Now this part of the course was hard going. Not that the first half was easy. The water and mud were obstructive enough to keep the first 30km to nearly 4 hours 25 mins! Yes! Going was soft and slow.

Out of CP3 the head was down and the grinding out of this event began. The Garmin was showing the CPs were not even slightly out but a long way. If this were just me, I would have laughed it off because we all make minor mistakes on these self-nav routes but by now, we were all celebrating a cheeky half back to base.

So onward through undulations....never really going as high as the 771ft Toys Hill. and often dropping into flooded river valleys.

CP4 at Cowden, we realised that the round was going to be long. Not a problem, in terms of distance, but the Weald mud was like Blu-tac and the running across fields was far greater than I had done in any race before. In fact, if we weren't running across a field, we were running around one.

Out of CP4 we got a move on. Ultra-Shuffle style. Rain came down, stopped, then came down again. We lost one of our group who decided to walk the rest of the way with Merv. Merv had not come in by the time I had left after waiting for Sue.

On up to CP5 at Dry Hill and the long drag up through the woods was run and not walked. Footprints ahead were fewer further between. We hit Dry hill CP with 31 miles on the watch, going wrong perhaps rarely.

At CP5 we were overtaken by the course record holder, which I am sure you can Google. Despite a "Hi, how are you.....looking good, moving well despite these conditions....." a total blank from the chap.....rather rude I thought. As far as ultra colleagues have made me aware, they seem to think he designs the routes. Whether they are right or not.....this guy was totally rude. Nuff said.

CP5 was allegedly 3.6 miles from the finish.........Well it was 5 miles. We had waded through the last 6-7 miles of pure mud and water, save for the odd 850m on tarmac. Down by the River Eden, it was wet. The river was ripe for bursting, with the water tantalisingly close to breaking the bank and rushing over the flood plain. As light faded, we made the last mad dash over the aerodrome, 6 inches deep in water and back to the start.

I've run the last 40 miles of a 100 miler quicker! This took me 8 hrs and 3 mins. Sue came in 90 mins later. A piping hot shower, hot dog and soup later and all was well. Not a drop of cider in sight, despite running through the domain of my favorite Chiddingstone Bone Dry Cider country.

Will I be back next year? 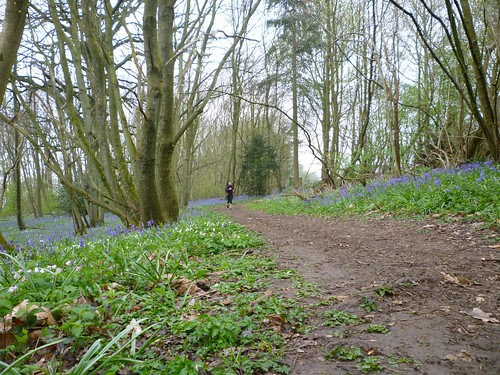 NDW Easter Sunday morning run - Bluebells in the woods near Kemsing, a photo by ultraBobban on Flickr.

The hardest 50km on the calendar approaches. Gatliff, which is a looop of the North Downs and The Weald....course record 5hrs 34.....yes the record is that! I think it might be beaten this weekend as there are a few non-W100 running it that I know. 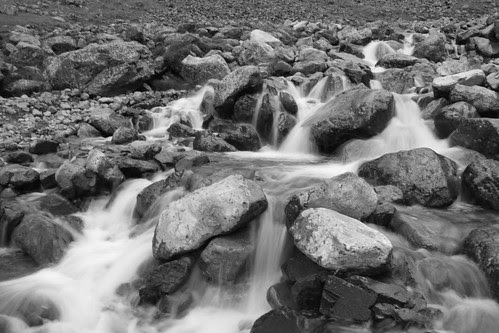 Mystical water B&W, a photo by ultraBobban on Flickr.

Just as I was waxing lyrical about feeling the buzz of running lots........I get sick. I had to take a day off work as felt sick, had virtually no sleep, then, after calling work and emailing in instructions for the day, it was back to bed for 6 hours and after a bath, then a blanket in front of the TV with the heating on full blast......am beginning to feel better. I hate being ill. I also don't like not running, but there are times when a run might undo the good recovery work.

Ron Hill-ing it through the autumn colours 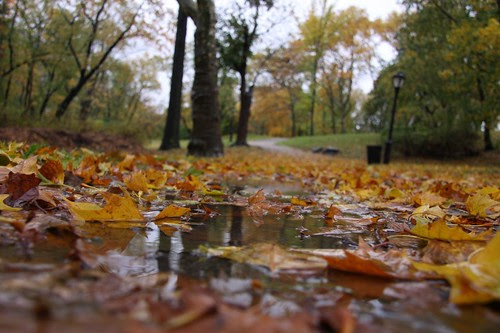 Central Park pathway, a photo by ultraBobban on Flickr.

I love this time of year. The colours of gold, copper, bronze, sanguine red and fading to brown leaves on the trees and on the pathways and parks of leafy South London.

I think it is a response to stress at work but I have felt much better running every day. I have now managed 8 days in a row. I must admit that Friday evening was a bit tough, especially as I had picked up Mrs UB from hospital in the West End where she has had a cyst removed from her vocal cord. All is absolutely fine but she is not allowed to speak for two weeks. I felt guilty about going out so kept that to a minimum 6k and a quick one at that. That has been the shortest run by far. this morning I ran with Glenn, then ran with Sue. Yesteryday I marshaled Crystal Palace Park Run. It was chucking it down so there was a dwindled field and had I have run, would have probably been in the top 5-10 runners! But then went out and did some wet miles up to Streatham and back.

I'm loving the running everyday........just need to get some more kit!!

Posted by UltraBobban at Sunday, November 11, 2012 No comments: 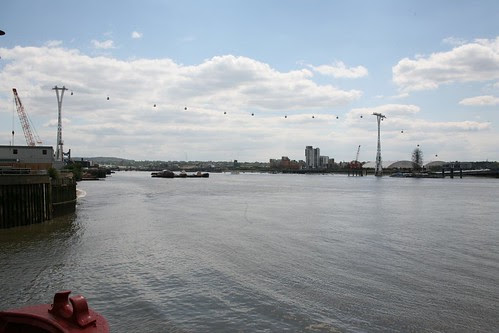 New Cable car over London, a photo by ultraBobban on Flickr.

I've been sitting here with the builders in so have not been able to go out much....except to pop to the shops.

In addition to the school work I have been catching up on, I have scoped out a really cool "Country to Capital" route which involves a train out into the sticks of deepest darkest Essex. I'm calling it Little London to Big Brother. Essentially it starts at the hamlet of Little London near Stocking Pelham on the Essex/Herts border not far from Stansted airport. it follows the route of the river Lea from source to confluence with the Thames at Leamouth with the finish being the Trinity house Wharf opposite the 02. This is only one of the possible routes as the Lea starts at Leagate near to Stevenage and 4 other locations.

I thought that with a nearby train station, the route of 35 miles could be completed as a training run and with a small camera, charting the route of the Lea Channel would be an interesting experience as well as good training. There is a really cool 50s diner at Trinity Wharf for a fat burger at the end. 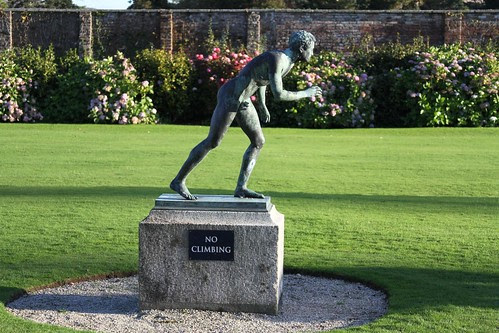 My legs feel like lead. Tight. Knotted. I have perhaps struggled to get some form after the Dublin marathon. What I should have done is go out next day, but car journeys and flights have left me a bit tight. Hence, my 2 runs of 10k and 11k with continuous hills have been slow and very recovery like. Next stop......Gatliff. Perhaps the toughest 50km race around.

Last year I ran Gatliff with Jerry and George. There were only 4 runners who achieved under 6 hours, giving you an indication of the terrain, the map work and the sheer hardness of it all. This year I might give it some more beans as there is a lot of track that is on the Founders Challenge, of which, with my getting lost, was 50k in 2 hour 20 mins quicker than I ran Gatliff last year.

I'm confined to the house today as I have the builders in doing much overdue work on the old upstairs bathroom, now bedroom, so will not be out running but will get in a long run tomorrow to start the week.

Posted by UltraBobban at Saturday, November 03, 2012 No comments:

Followers of the adventures of UltraBobban